The Company made an announcement this afternoon.

We look forward to the discussion and hope you will be able to participate."

When the Competitive Power Alliance opposed APS's purchase of the Four Corners Power plant, we predicted that the purchase would be a financial disaster for APS.  Our prediction has come true and APS is attempting to cut its losses by retiring the plant in 2031.  This is seven years earlier than the planned retirement date.

ACC Chairman Bob Burns has asked APS to come up with a plan to account for the stranded investment associated with the closing the plant early.    Here's a copy of the Burns letter.

If I had my consumer advocate hat on, I would argue that there is no stranded investment associated with the early retirement.  The rationale for stranded investment is that the company was required to make the purchase in order to ensure reliability.  The Regulatory Contract implies that in exchange for this increased capacity, the ratepayers on on the hook for any costs associated with the early obsolescence or retirement of the plant.

However, APS purchased the plant over the objections of the stakeholders.  Sure, the plant increased capacity and reliability, but it was one of the more expensive and riskier options available at the time.  APS bet heavily on the long term economic viability of coal and lost.  They could have met their needs through low risk contracts with existing natural gas plants.  They assumed the risk and now they are trying to shift that risk to ratepayers.

Like Banking--30 employees and 25 of them are Vice Presidents.

ACC Chairman Bob Burns has fired yet another shot across the bow of APS.

Burns then proceeds to ask 22  questions about the structure of senior management including the number of Vice Presidents and their salaries.  Here's a copy of  the letter.

Rolling in the Deep

California's rolling black outs are getting plenty of attention in Arizona.

Here is a  list of questions being asked by Commissioner Peterson.

You may have seen the most downloaded article on AZ Central last month--Drones swarm Palo Verde Generating Station.

Now ACC Commissioner Lea Marques Peterson has asked for an explanation at the next ACC Open Meeting.  You can read the letter Here.

Here is the best illustration to sum up this summer in Arizona. 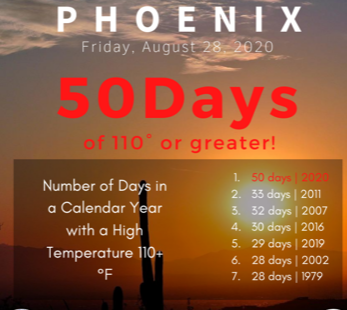 APS on the Future of Natural Gas

Here's an interesting take on the latest APS earning's call.

Between now and 2035, the APS territory is expected to see steady growth even as 1,400 MW of coal capacity is retired and 1,600 MW of gas-fired generation purchase agreements expire. Overall, APS by 2035 still would need another 6,000 MW of capacity, Guldner said

Those of you who don't live in AZ will not be surprised by a headline that says "Statute Trumps ACC Rules."  After all, don't laws always trump rules?  Not in Arizona.  The Arizona Corporation Commission is a Constitutional body and has long argued that it has sole authority over Public Service Corporations, so its rule making authority with respect to the companies that it regulates trumps Statute.

¶30 However, when there is a conflict between a Commission
regulation and a statute, the legislature’s police authority is “paramount,”
meaning it has the authority to override the regulations of the Commission.
Pacific Greyhound, 54 Ariz. at 176–77 (stating that apart from the
Commission’s ratemaking authority, “under the direct language of the
constitution and the police power inherent in the legislative authority, the
paramount power to make all rules and regulations governing PSCs not
specifically and expressly given to the[C]ommission by some provision of
the constitution, rests in the legislature”); see Ariz. Const. art. 14, § 2 (stating
that all corporations doing business in Arizona may “be regulated, limited,
and restrained by law”); see also State v. Harold, 74 Ariz. 210, 215–16 (1952)
(holding that the legislature has a duty to exercise its police power to enact
laws “reasonably necessary for the preservation of the public health, safety,
morals, or general welfare of the public”).

McMicken Report is out.

We have been eagerly awaiting the report on the APS McMicken fire.  Here's a copy of the report Download McMicken and here's an interesting article from Greentech Media.

In the previous post, I provided some details of the ACC rule making process plus a link to the proposed rule.  Here's a screen shot of the Clean Energy Proposal.