In case you missed it....WSJ article on PGE.

I'm posting this in case you missed the WSJ article about PGE.  It's excellent.

PG&E Corp. PCG 3.45% Chief Executive Tony Earley liked the idea the minute he heard it. He would change the signature line on company emails—“PG&E is committed to protecting our customers’ privacy”— to promote safety instead.

Six months after a top state regulator suggested it, nothing had happened.

“We have one more level of governance to go through before we can change,” Jack Hagan, the regulator, recalled Mr. Earley saying.

The ACC has been dabbling with Retail Access for 25 years.  That's not an exaggeration.  As RUCO Director I signed Retail Access Settlements with APS TEP and SRP in 1999.  We had been working on the issue since 1994.  The ACC unwound those agreements in response to the California Energy Crisis of the early 2000s.

Since that time, the ACC and parties have made various attempts to restart the process.  The last major effort was abandoned in September of 2013.

Since 2013, there have been a lot of changes.  Retail Access has a track record in quite a few states. Opponents and supporters both use the example of Texas and Nevada to support their cases.  There as also been a major shift in the media view of APS.  The media are now more likely to view consumers being captured by as opposed to protected by the utility.

Currently there are two Commissioners--Burns and Olson--who are strong advocates for Retail Access.  Commissioner Kennedy is opposed while Commissioners Dunn and Marquez Peterson are open to discussion.

In order to foster that discussion, the ACC staff posted a series of questions.  You can download Staff Competition Questions

Last week the Industrial Consumer group (AECC) filed its responses to the questions. Click to download the AECC responses  I think that they are informative and will give you a flavor for the issues.

Meanwhile, here is a link to the docket.  After you click the link you can open the "Documents" tab and see everything that has been filed.

We are in the early stages of this iteration of the process. The ACC is planning to host a series of workshops.  The Alliance has participated in support of competition and we will do so in the future.  If you have any questions about this docket or our positions, please call me.

Recall that the APS Rate Comparison Tool website sent 12,000 customers to the incorrect rate.  APS President Jeff Guldner addressed the issue for 6 hours at the December Open Meeting.  The APS investigation has traced the source of the problem to a February 2019 software update.  All of the customers were billed properly, but for some of them, the advise from the rate tool was incorrect.

Com. Kennedy issued a letter a few weeks ago (see entry below) in which she pointed to problems before February 2019 and argued that APS had not correctly identified the problem.

APS VP of Regulatory Affairs has issued a response in which the company explains the complaint that occurred before the February update.

Normally, I would not devote so much time to this issue, but it is very important to the ACC and to the company--plus, it has received a lot of media attention so I want to make sure that you can follow it if you are interested.

Kennedy Letter on the Brandt Contract

APS has retained former CEO Don Brandt for the first year of the Guldner Presidency.  Commissioner Kennedy has a lot of questions about the contract and would like members of the PNW Board to speak at the January Open Meeting.  Here is a copy of the letter with her request and questions.

APS Procedural Schedule is out

Recall that under a traditional schedule for the APS rate case, the final vote would likely be in 2021 after the swearing in of new Commissioners.  The ACC asked the hearing division to draft several accelerated schedules and then called an open meeting to approve one of them.  They chose "accelerated Schedule 3"  Here is a copy. APS Procedural Order

The hearing will start on July 17th and this is likely to force us to reschedule our summer conference in San Diego.  I'll keep you apprised of the new dates.

Meanwhile, the hearing officer instructed the parties to bring a grid that lays out there issues and I will be circulating with Alliance members to discuss the details of the case.

Here is a copy of the letter 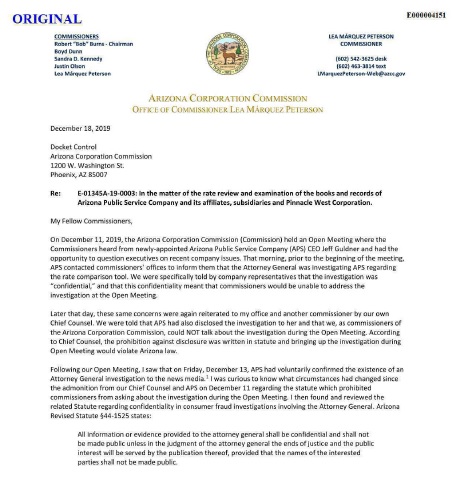 APS: When it Rains it Pours

The Arizona Attorney General has confirmed that he is investigating APS's Rate Comparison Tool as part of a fraud investigation.  During the December 11th Open Meeting, APS President Jeff Guldner led a presentation in which the company said that a bug was introduced into the Rate Comparison Tool during a February 4th update.  However, Commissioner Kennedy filed a letter in which she asserts that the RCT has been giving wrong answers since APS introduced it in 2017.

Meanwhile, the ACC has scheduled a special Open Meeting for Thursday December 19th in order to discuss and possibly set a procedural schedule that would force the latest APS rate case to be decided before the January 2021 swearing in of new commissioners. 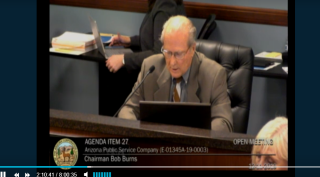 The video of the ACC Open Meeting with Jeff Guldner is out.   Here is the link.

As you can see from the screen shot, Chairman Burns' opening comments start at 2:10.00

I would urge you to watch the opening comments of the Commissioners--especially Commissioner Burns who questions the entire utility rate making model. 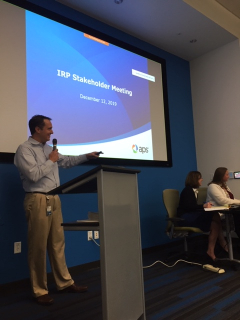 APS is hosting a series of Integrated Resource Plan stakeholder meetings in which the company presents some of the analyses that will go into the ultimate IRP process.

We are getting into the weeds, but the meetings provide a good opportunity to review the underlying assumptions and to discuss them with the APS personnel in charge of drafting that part of the plan.

The discussion of Natural Capacity was the most relevant. The bottom line is that the company believes that natural gas requirements in AZ and NM will remain strong in the short term, but are likely to decline as CA moves away from gas and towards its RPS goals and battery storage.

The company identified the source of the problem as a programming error introduced in a February 4th update.  That error shifted the Time of Use Rate period by one hour on the Comparison Tool.  The actual billing is on a separate system and was never compromised.

However, customers that used a lot of power just prior to the start of the real time of use rates--for example, those that pre-cooled their house--were advised to switch off of Time of Use because the website recorded their pre-cooling as On Peak.

Approximately 10,000 customers accessed the website and then switched to more expansive plans APS is issuing automatic refunds plus an additional $25 credit to those customers.

(*I met with Jeff briefly at APS the following day and he said that the meeting was so long that no one won the pool.)