PURPA Updated to include link to Decision

Here is the link to the decision.

Arizona has had a long-standing policy to support PURPA.  Several years ago, the incumbent utilities decided that they would not offer PURPA contracts that exceeded 2 years.  In 2016 they filed an application at the ACC in order to get approval of this policy.  The ACC didn't hear the case and the incumbents continued to implement it anyway.

A company called "1.2 GW LLC"  wanted longer contracts pushed for a hearing on the case and this week the ACC rule that the utilities had to offer contract length of at least 18 years.  The vote was unanimous and enthusiastic--in fact, the  company had requested 15 years and the ACC bumped it up to 18.

There is naturally much wailing and gnashing of teeth from the incumbent utilities.  However, no one is sure exactly how this will affect the market.  The ACC made it clear that they want additional investment in renewables and they want to expand the IRP process to ensure that companies have an opportunity to make additional investments.

If there is one take away from the meeting, I would say that the ACC believes that "the enemy of my enemy is my friend".  They are looking for alternatives to APS.  In his opening statement on the billing issue, Chairman Burns once again pushed for retail competition.  He believes that the current regulatory model is broken and is looking for alternatives.  I believe that the Commissioners viewed the PURPA docket as an opportunity to create another avenue for the "other than APS" options.

In order to get a contract, a QF will, of course, still have to meet the other PURPA hurdles, including of course avoided cost.  The final order isn't out yet, but I will upload it once the ACC issues it.  Here is additional coverage from Utility Dive.

During an earlier update, I mentioned that the ACC held a procedural conference on Monday and granted our intervention.  The hearing officer said that she would come up with a schedule.  She didn't provide much detail, but it was clear from the discussion that the ACC would be deciding the case after the election.  Commissioner Burns called a staff meeting to go over the schedule.

The Commissioners met with staff this week and instructed them to come up with a schedule that gets the case done in 2020.  It would be very difficult to process a case off this complexity in less than a year, but staff is going to come back with a draft schedule.

Update:  This afternoon, the hearing division sent out this document that details the statutory requirements for the schedule.

The ACC held a procedural conference in the APS rate case today.  The hearing officer granted intervenor status to the AzCPA as well as several other parties and then set to work on two important procedural issues.

She denied a motion in which one of the parties sought to prohibit Staff from entering into settlement agreements.  In denying the motion, the judge made it clear that the ACC had already banned Staff from entering into settlement discussions on any future cases without the express permission of the Commission.   That means that for the first time in over 30 years, APS will have to fully litigate a case.

Then the judge started working with the parties on a procedural schedule.  Staff and APS proposed schedules that would end in a vote after the swearing in of new commissioners in 2021.   She said that she would take the schedule under advisement.

Now, it looks like that's not going to happen.  This afternoon, Chairman Burns amended the Staff Meeting Agenda to include a discussion and possible vote on the schedule.

This is an extraordinary move and is likely to put the parties in a bind.  If the ACC insists that the case be fully litigated and also insists that it be voted on by the end of 2020, then it's going to be on a really tight schedule.  The hearing officer asked staff and APS for an estimate of the number of days required for the hearing itself.  They came up with a consensus of 25--four full weeks of hearing.  My estimate would be much longer.  (I've been in every APS rate case since 1996 and all of those have resulted in settlements.  However, legend has it that in the last fully-litigated case, the parties spent a full week on the weather normalization adjustment.)

However, I anticipate that the Commissioners will order the parties to get the whole thing done by the end of 2020.  It's going to be a busy year.

Utility rates are so complex that customers often pick a rate plan that is more expensive than other plans.  In the last rate case, APS proposed to be allowed to shift consumers to the optimal plan however, the ACC rejected this proposal because consumers don't always chose plans based on price.  For example, they may want to avoid demand charges or dislike time of use rates even if those plans cost less.  APS and the ACC are looking for other ways to more closely match customers with the proper rates.

APS has established a "Shadow Billing" process in which the company keeps track of the bills that a customer would have had if they had been on the cheapest rate.  In theory, this information would inform and motivate consumers to change plans.  The ACC is concerned about the accuracy of the shadow billing numbers and APS has suspended the program.

Additionally, APS has discovered that the rate recommendation tool on its website has steered 12,000 customers to the wrong rate plan.  The company is recalculating the results and issuing credits to the affected consumers.  Naturally, these very public problems have attracted the interest of Commissioners.

Commissioners Olson and Dunn have filed a series of letters about the issue and have asked that the case be placed on the December Open meeting docket.   The company has responded that APS President Jeff Guldner will be on hand to answer the Commissioner's questions.  Here is a copy of the notice.  Below that are copies to the Commissioner Letters.

Arizona Public Service Company (E-01345A-19-0003) - In the matter of the rate review and examination of the books and records of Arizona Public Service Company and its affiliates, subsidiaries and Pinnacle West Corporation – Discussion, consideration and possible vote regarding the APS rate comparison tool, implementation of effective Customer Outreach and Education Program, and proforma billing; in particular the issues contained in the letters from Commissioner Olson (November 15 & 26, 2019) and Commissioner Dunn (November 20, 2019).

The folks from NV5 are in town and we had a good meeting with Com. Olson. 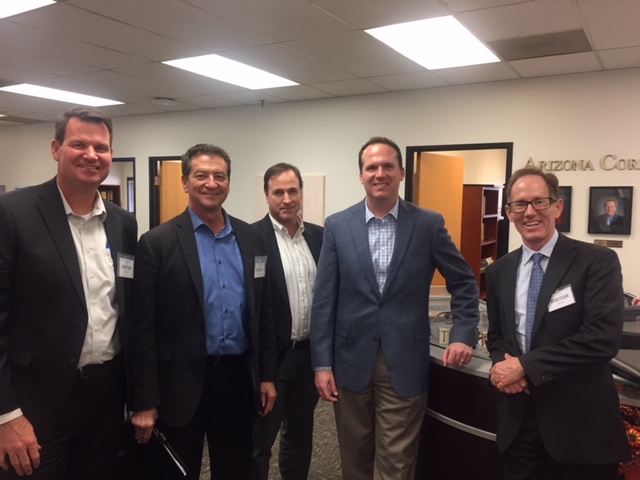