Home About the AzCPA Staff 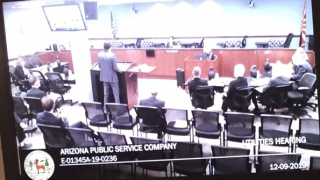 The ACC held a procedural conference in the APS rate case today.  The hearing officer granted intervenor status to the AzCPA as well as several other parties and then set to work on two important procedural issues.

She denied a motion in which one of the parties sought to prohibit Staff from entering into settlement agreements.  In denying the motion, the judge made it clear that the ACC had already banned Staff from entering into settlement discussions on any future cases without the express permission of the Commission.   That means that for the first time in over 30 years, APS will have to fully litigate a case.

Then the judge started working with the parties on a procedural schedule.  Staff and APS proposed schedules that would end in a vote after the swearing in of new commissioners in 2021.   She said that she would take the schedule under advisement.

Now, it looks like that's not going to happen.  This afternoon, Chairman Burns amended the Staff Meeting Agenda to include a discussion and possible vote on the schedule.

This is an extraordinary move and is likely to put the parties in a bind.  If the ACC insists that the case be fully litigated and also insists that it be voted on by the end of 2020, then it's going to be on a really tight schedule.  The hearing officer asked staff and APS for an estimate of the number of days required for the hearing itself.  They came up with a consensus of 25--four full weeks of hearing.  My estimate would be much longer.  (I've been in every APS rate case since 1996 and all of those have resulted in settlements.  However, legend has it that in the last fully-litigated case, the parties spent a full week on the weather normalization adjustment.)

However, I anticipate that the Commissioners will order the parties to get the whole thing done by the end of 2020.  It's going to be a busy year.